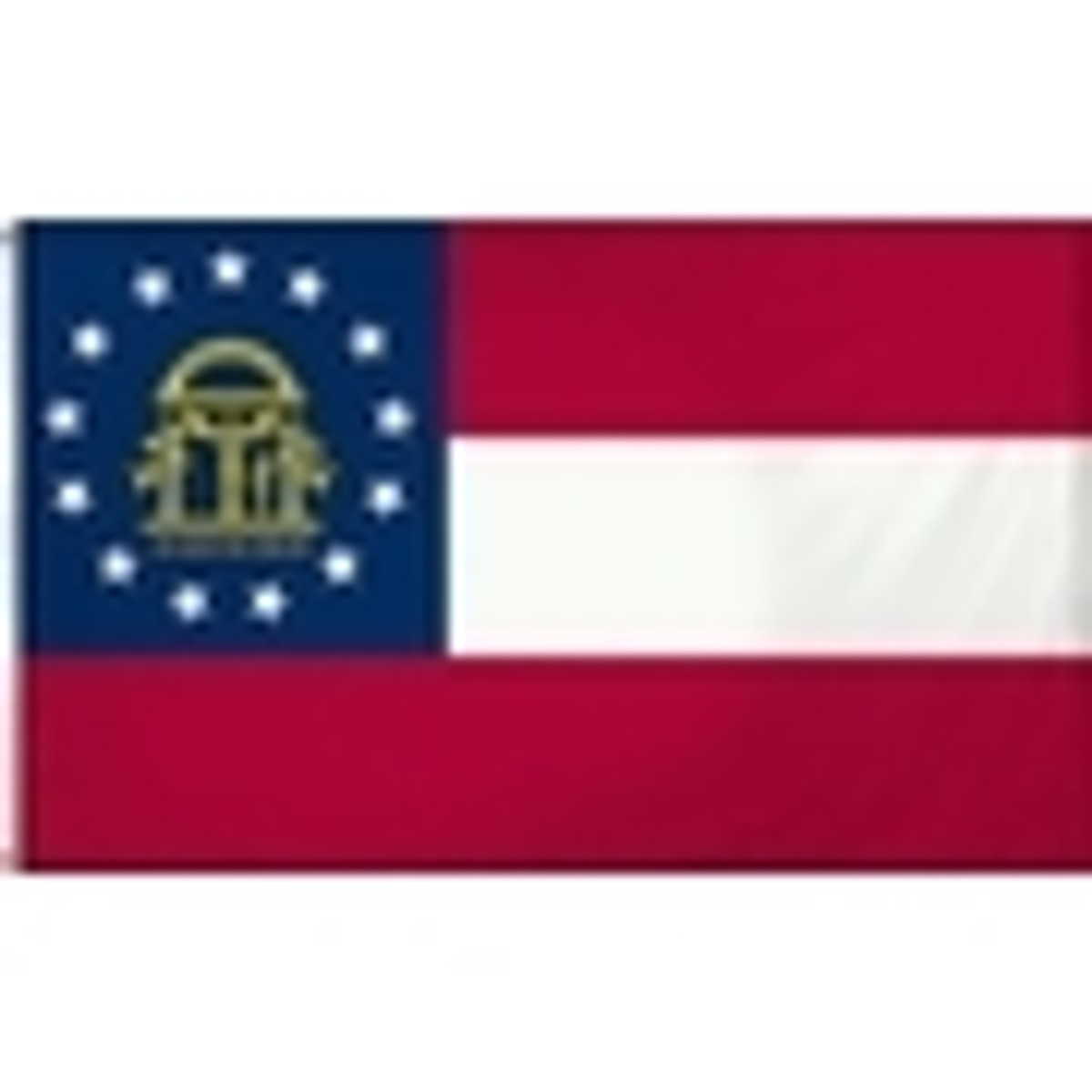 Did you know that there have been seven Georgia flags before the current one was adopted in 2003? Residents of the states actually voted in a referendum on the Georgia flag that now represents the state.

The United States Flag Store is your one stop shop for state flags from all 50 of the United States and "The Peach State," is no exception. This new flag is a wonderful reworking harking back on an older design. We offer these flags in nylon, printed polyester along with polyester blends. Anything from stick flags, which are great to give away at parades, festive and political events to motorcycle flags that will ride along with you across the country. We also offer the classic 3' x 5' flag of Georgia that would look great flying high outside your home or business and Georgia Flag Lapel Pins to show your passion on the go.

What does the Georgia Flag look like, symbolize and what are the colors? Redesign and Meaning

The new flag design of Georgia has three horizontal stripes of red, white, red with a blue field in the upper left. In the blue field, the state's coat of arms is placed in the center with 13 white five-point stars surrounding it and the motto, "In God we trust," underneath the coat of arms. This new flag is the state's answer to outdated ideals while also still honoring its past. This flag sees an amalgamation of both the old "stars and bars," design of the Confederate States of America with its stripe work and the 13-star design of the original Betsy Ross flag of the United States of America. Bearing all this in mind, this state flag is very reminiscent of older American flags, both Union and otherwise.

The colors on the Georgia state flag are that of old glory red, white and old glory blue and gold. It houses the national colors of the United States along with gold. The state's coat of arms can be elaborated on as follows. The Georgia coat of arms shows three pillars with words of the state motto, "Wisdom, Justice and Moderation." These three pillars are representative of the three branches of government, legislative, judicial and executive. There is an arch overtop that stands for the state's constitution and a figure dressed in revolutionary attire with a sword drawn indicating the defense of the state's constitution. The year 1776 is inscribed below in correlation with the year America declared its independence.

The 13 white stars are indicative of the state's identity as one of the original 13 colonies. "In God we trust," seen it's origination in the civil war and has long been a popular and widely used motto both in the state and in the United States of America.

The first official state flag of Georgia was first introduced in 1879 by Herman H. Perry, Georgia state senator at the time and former Colonel in the Confederate army. It's thought that he may have also designed the First National Flag of the Confederacy, also known as "The Stars and Bars," flag, not much of a far cry considering the major similarities between the two. This design had simply the three red and white alternating stripes with the blue field on the left covering a third with no other symbols on it. In 1902, the state's coat of arms would be added to this version. Around the year 1906, a white shield and the name "Georgia," would appear. In 1920, most of Georgia's flags made the transition over to having the state seal in the blue field. It should be noted however, that the state seal has within it the Georgia coat of arms.

In 1956, the Georgia flag that was adopted was one that had two thirds of it covered in the Confederate Battle Flag. This was brought in at a time when segregation and racism still ran rampant in the country and Brown V. The Board of Education was still very much in the public's mind. Atlanta attorney and state Democratic Party leader John Sammons Bell spearheaded this project and while it is said that it was merely in celebration of the Centennial of the Confederate War that was coming up at the time, this is thought to be more of a back paddle. While attempts to change the flag for the 1996 Olympic games being held in Atlanta had been thwarted as nothing was passed in legislature, it is thought that many residents and businesses of Georgia refused to fly the 1956 flag and chose to fly the pre 1956 flag.

While there were many groups and people against this version of the flag, it would not be changed until 2001. This is what would be known as the "Barnes rag," to the opposition. This flag saw the state seal in gold on a solid blue field with a ribbon with five miniature flags at the bottom, depicting older flags that had represented the state. This ribbon had the words "Georgia's History," on it with the Betsy Ross Flag, Georgia's 1799 state seal flag, the 1920 flag (The Stars and Bars with the state's seal), the controversial 1956 (the two thirds Confederate Battle flag) and the United States flag.

When was the Georgia flag changed?

The current state flag of Georgia was officially brought into effect in March of 2004, though was introduced to Georgia legislature a year prior.

The Georgia state motto is "Wisdom, Justice and Moderation."

The Pledge of Allegiance

"Pledge allegiance to the Georgia Flag and to the principles for which it stands: Wisdom, Justice, and Moderation"